Louis Icart was born in Toulouse, France, the first son of Jean and Elisabeth Icart. The culturally rich city of Toulouse was home to many prominent artists and writers, and proved to be a source of inspiration and encouragement for the artist. Though his education was at first geared toward banking (his father's profession), he soon discovered the plays of Victor Hugo, which he studied endlessly; this discovery of theater would prove to be what sparked his love of the arts.
In 1907 Icart moved to Paris, on the dwindling but still shining end of Le Belle Epoque and on the burning heels of Picasso's hotly contested Cubist revolution. Here he began his studies in painting, drawing, and printmaking. By the early 1920s, when Art Deco had taken hold of the Paris scene, Icart's images of women-glamorous, sensuous, and often imbued with a sense of humor- reached their height of brilliance and tapped the market of the immensely popular image of female youth. Yet, while his images captured this modern fervor, they also retained the classical line and form of the eighteenth-century masters he'd studied, such as Jean Antoine Watteau, Francois Boucher, and Jean Honore Fragonard, as well as echoing the age of Impressionism. In fact, Icart lived outside the fashionable artistic movements of the time and was not completely sympathetic to contemporary art. He did not embrace the saturated market of fashion-plate, emotionless figures in fine clothing, but began to turn toward the coquettish, playful, expressive muse in waifish, clinging drapery. Despite his hesitations, his work surged in popularity at the end of the twenties, in Europe and to even greater acclaim in America.
Throughout his service in World War 1, a passionless marriage, his long love affair (and eventual second marriage) with artist Fanny Volmers, and the changing tides of politics and the art market, Icart remained true to his artistic expression, and always with humor and grace.
REFERENCE: ic0110
€450.00
Email us about this item 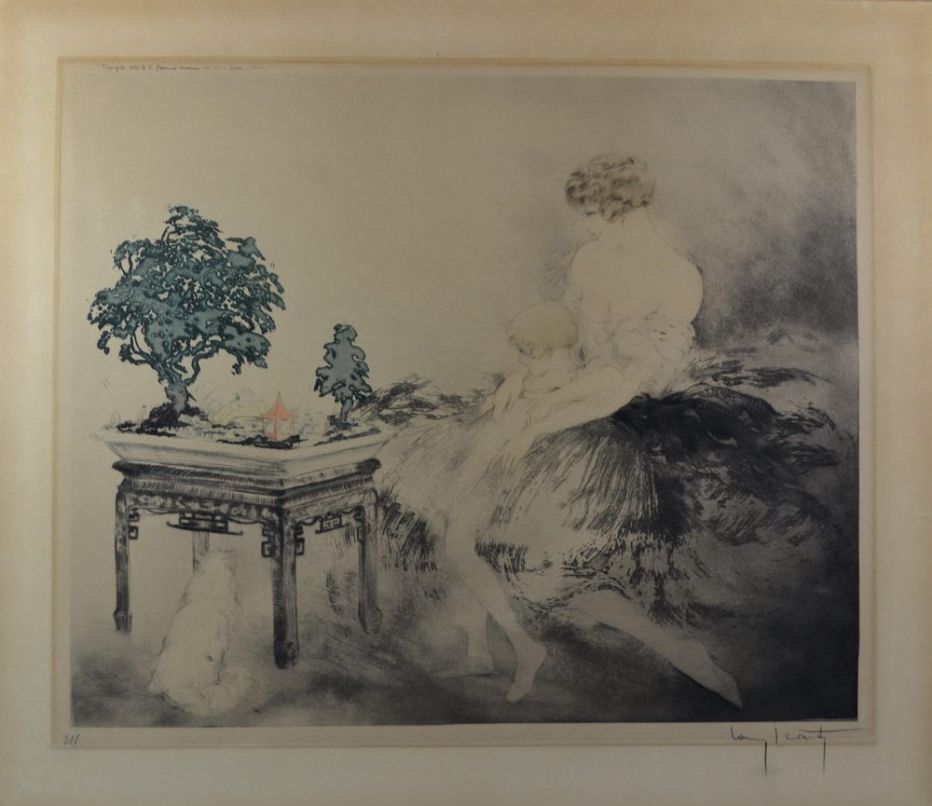