Large Oil painting on board with 3 characters.
Excellent condition.
Circa 1930
82cm 62cm with frame
70cm 49cm without frame.

Luigi Bompard was born in Bologna in 1879. His parents were Jules Bompard, a Briançon's dealer, and Cesira Oppi, a photographer. Self-educated, he frequented the artistic milieu of his town, by taking a studio in the 1902 at Palazzo Bentivoglio, a place chosen by the Bologna Bohemians as a meeting point and residence of the “Giambardi della sega”, a congregation of artists recognized by Alfredo Baruffi in the homonymous publication. His particular graphic style drew him to the world of illustration, at that time very prosperous in Bologna, with its innumerable newspapers and magazines, for exampleIl Natale de la Lira and Italia Ride which

delineated the Felsinean graphic style at the turn of the century, gathering consensus from persons such as Ugo Valeri, Alfredo Baruffi, Augusto Majani, Franz Laskoff. Bompard was also involved in Poster designing as of 1903, in Eduardo Chappuis's print-shop near to Marcello Dudovich. His pictorical expression came to prominence through is participation in the exhibitions at the ‘Premio Francia' in Bologna , in the years:


his works were also on display at the Permanente Exibition and “Famiglia Artistica” Society (1916). He became a member of the “Associazione Acquerellisti Lombardi”. During the first World War he collaborated with the L'illustration in Paris.

At the end of the war he decided again to move to Rome where he continued to paint and to produce illustrations for specialized magazine such as Il Travaso delle idee , Noi e il Mondo , Vita Femminile , Il Corriere dei piccoli , Marc'Aurelio , Guerin Meschino . He also illustrated novels, some of the covers which he designed. Luigi Bompard died in Rome in 1953.

His first clever, sardonic drawings for Il Natale de la Lira and Italia Ride (1898/1900) evidenced the beginning of a promising career as an illustrator, a career that lasted more than fifty years and gave him full right to be considered as one of the major inventors of a new artistic style in Italy.

From his beginnings in Bologna , under the influence of both the liberty style and periodicals such as the prestigious English magazine The Studio , and the German Jugend, Bompard gradually created his own language based upon the precision of the sign and his peculiar ironic trait that bordered on caricature.

For the majority of magazines of that time, he was known as ‘the tip-of-the-pencil report' because of his striking capacity to illustrate major national and international events such as the “Lipsia Exposition” in Paris or the veterans war's stories for the La Lettura in Milan .

But his best work, much closer to his temperament, was humorous and - why not? - frivolous. He would design elegant and charming women accompanied by very fascinating gentlemen set in the foyer of a theatre, a restaurant, salons or the racing tracks where high society paraded its vanity. Bompard was a careful observer of the habits and customs of people. Through his paintings and illustrations he followed the evolution of fashion and the transformations of the country for fifty years.

The woman, the subject of almost all of his works, was described through expressive glances, nonchalant gestures and sensual poses that showed his deep knowledge of the feminine heart. The women's attitude dissolved in an ironical veil, offering a certain regard of their nature for the reading public of novels and magazines of that epoch.
REFERENCE: bom2102
sold 02 2020 (USA)
Email us about this item 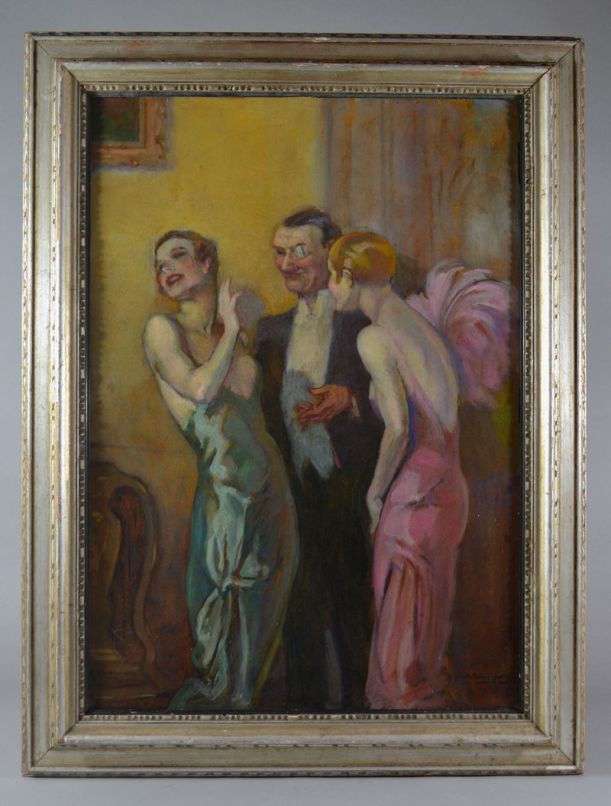