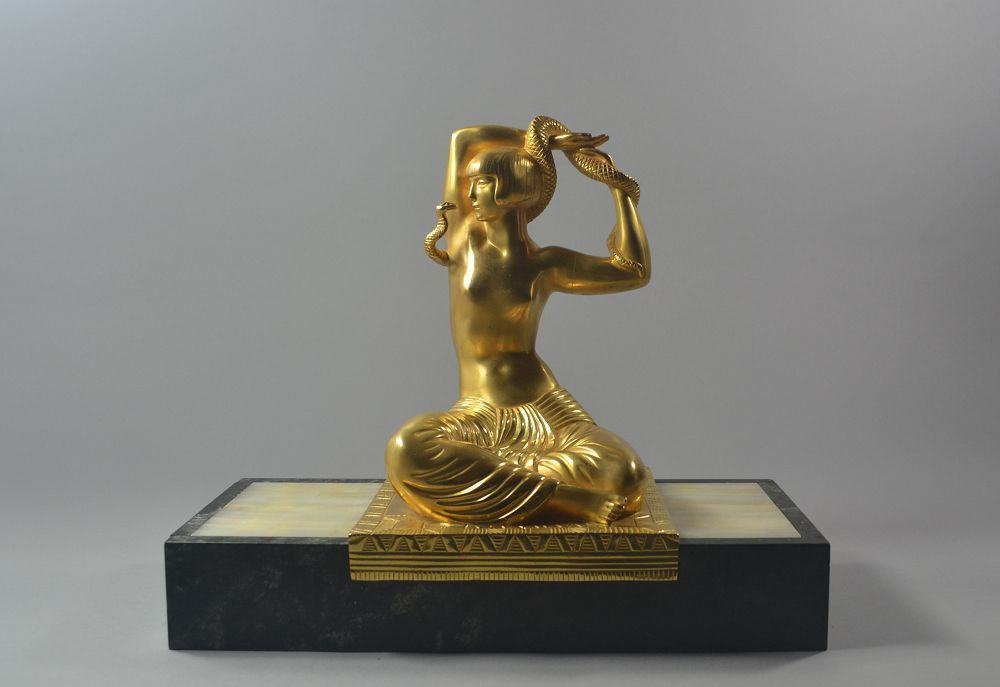 A high quality gilded bronze figure of a snake charmer on a marble and onyx base.
Signed in the bronze.
Prestigious Foundry mark "La Stele" in the bronze.
Circa 1925.
Excellent condition.
34cm wide. 28.5cm high.

Raymond Delamarre (1890-1986)
Many informations in english on wikipedia : click here

Raymond Delamarre (1890–1986) was a French sculptor and medalist. His output in both spheres was huge, and this article seeks to identify his main works and in many cases describe them. It will be seen that he played a major role in the Art Déco movement. His ecclesiastical work showed him to be inspired by the catholic religion but he was agnostic, and his war memorials are particularly expressive, no doubt influenced by his own firsthand experiences of the horrors of the 1914–18 war.

Biography  :
When aged sixteen years, Delamarre joined the École des Beaux-Arts in Paris and was attached to the studio of Jules-Félix Coutan. His studies were interrupted, firstly by his conscription into the army from 1911 to 1913 and then service from 1914 to 1918 after the French mobilization, although between the two he managed some further time back in Coutan's studio. Soon after mobilization Delamarre was sent to the front and was almost immediately taken prisoner. He was released in the course of an exchange of prisoners carried out in 1916 and returned to active service.

On leaving the army at the end of the war, Delamarre now tried to secure the "Prix de Rome" and with the bas-relief "Le retour du guerrier au foyer familial" he shared the prize with Alfred Janniot which meant he was able to spend four years in Rome at the Villa Médicis. He was to stay in Rome until 1924, grew a moustache and visited and studied the sculpture of Greece. The composition "Suzanne au bain" exhibited in 1922 at the Salon des Artistes Français is a good illustration of Delamarre's work at this time.

In 1925 and in collaboration with the architect Michel Roux Spitz, he took part in the competition to secure the work on the proposed "Monument à la Défense du canal de Suez" to be erected in Ismaîlia, a work of huge proportions and a most prestigious project. Also working with Roux-Spitz, he exhibited a sculptural composition for a water fountain at the Exposition des Arts Décoratifs in Paris, the bas-reliefs "Nessus et Dejanire" and "Persée et Andromède" cast in bronze in 1935, two tympani for the decorator Paul Follot, a bronze entitled "David" and a work in plaster entitled "Femme au bélier". Between 1926 and 1927, Delamarre worked on the "Mowgli" ronde-bosse. He also executed a bas-relief of Mowgli in plaster measuring 2 metres by 2 metres.

In 1927, Delamarre married Mariel Jean-Brunhes, the daughter of the geographer Jean Brunhes and they made visits to Spain and the Ballearics. In 1928, he produced the group "Adam et Eve" or "La tentation" in bronze, which composition was to appear subsequently in various limited editions, in both bronze and plaster. In 1931, he participated in the Exposition Coloniale de Paris, creating the figure of Christ carved from acajou wood from Cuba and eight Beatitudes. 1935 saw completion of his work for the ocean liner "Normandie" and 1937 he completed his great work in bronze for the Palais de Chaillot with three 4-metre-high figures being created symbolizing Philosophy, the Visual Arts and the Arts. These figures were erected after the 1939–40 war. These three figures were to reappear in a number of limited editions in both plaster and bronze and in a variety of sizes. From 1961 to 1973, he managed the business of the "Art Sacré" studios in Paris' place de Furstenberg, working with Maurice Denis and Georges Desvallières.

In 1963 Delamarre created the last of his great "monumental" works, executing 12 reliefs in stone for the entrance of the chapel of Nantes's new hospital, a building designed by Michel Roux Spitz, after which he worked on a number of busts, statues, medals and plaque until his death on 28 February 1986. His output both in medals and sculptures was huge. This article will concentrate on sculpture although a second article, just on Delamarre’s medals would be both justified and welcome.