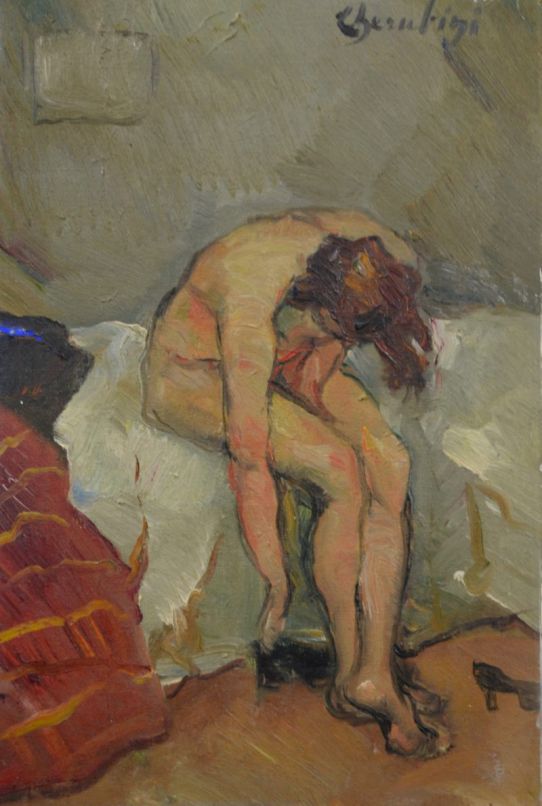 Carlo Cherubini (Ancona 1897 - Venezia 1978),
At seventeen was admitted at La Biennale di Venezia where he returns in the years 1922-24-26. Moved to Paris in the thirties he performs important works for example the decorations for the "Lido". In 1926 he decorated a room at coffee Martini in Venice. At the exhibition of French artists in Paris he receives, in 1930, the "Mention of honour". Two years later he obtained the silver medal.
In 1923, after decorating a room in the Latin Quarter of Paris, he travels to New York to perform a work at Lido Club of Long Island. A year later, in Venice and then to Paris. Later he returned to Italy on the eve of World War II.
Mario Stefani wrote: "in him tradition and modernity merge by being equivalent, without destroying each other and in the most successful moments he is the indefatigable singer from the human figure, in color, of all his sensitivity as an artist. In these moments Carlo Cherubini becomes the Master who we all know, the intelligent heir of many great Venetian painters of the past. His language, then, becomes European, frees himself of all nettles, to reach a secret harmony. He stops the moment, captures a face, in the eyes, the mystery of life, seeks its own exaltation through light ... Many times the painting becomes an expression of a mood, a subtle melancholy, a Baudelairian spleen, an abandonment, a thoughtful moment full of sadness ... This is why Carlo Cherubini has his own specific physiognomy and is also the secret singer of our own soul ".