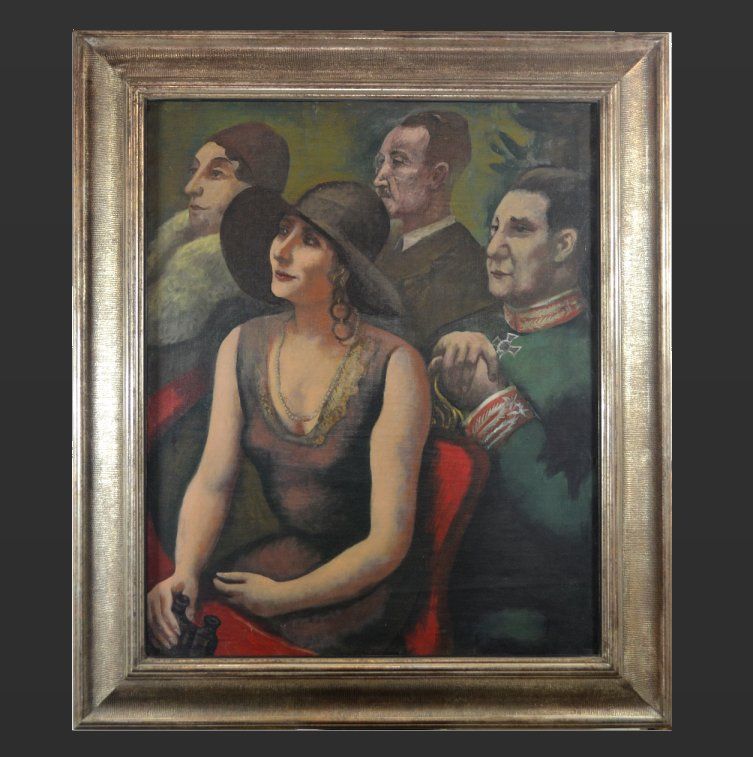 As a style-defining representative and advocate of the New Objectivity, August Wilhelm Dressler left behind a comprehensive work of painting and graphic art that captivates with an internalized representation in the classic painting tradition. His numerous portraits and nudes of women are of particular importance .

Dressler first trained as a lithographer in Chemnitz . From 1907 he studied at the Dresden Art Academy with Robert Sterl , Raphael Wehle , Osmar Schindler and Richard Müller . Among other things, Dressler made the acquaintance of Otto Dix and exhibited in the Emil Richter Gallery . He came into conflict with his teacher Richard Müller and was exmatriculated . Dressler moved to the Academy for Graphic Arts and Book Trade in Leipzig . Contacts with the Dresden Secession Group in 1919 however, persisted.
After training in Leipzig, Dressler moved to Berlin as a freelance artist and joined the November Group there. In 1924 he became a member of the Berlin Secession . Between 1925 and 1936 Dressler took part in various exhibitions at the November Group, the German Artists' Association and the Prussian Academy of Arts ; among other things, he took part in the first exhibition “ Neue Sachlichkeit ” in the Mannheim Kunsthalle in 1925 and in the Stedelijk Museum in Amsterdam in 1929 . In 1928 Dressler also published in the communist Eulenspiegel .
During this time, Dressler received his first prizes for his artworks, namely the Rome Prize of the Prussian Academy of Arts in 1927 and the Dürer Prize of the City of Nuremberg in 1928 . Between 1930 and 1931 he was awarded a fellowship at Villa Massimo , Rome. From 1934 Dressler finally taught at the Staatsschule Berlin, from which he was expelled again in 1938 as a "degenerate artist" . From 1956 to 1957 he had a teaching position at the "Master School for Arts and Crafts" in Berlin.
In 1937, as part of the Nazi campaign “Degenerate Art”, works by Dressler were demonstrably confiscated from the Kronprinzenpalais Berlin, which belonged to the National Gallery, the Museum of Fine Arts in Leipzig and the Museum of Arts and Crafts in Stettin.
Many of his paintings were lost during World War II . After 1945, Dressler repeated some of his earlier works using photographs. He was married to the painter Käthe Knorr-Dressler . From July 1937 to February 1945, Dressler lived and worked illegally in his wife Käte's studio in the Klosterstraße studio community .
August Wilhelm Dressler died in Berlin in 1970 at the age of 83 and was buried in the Old St. Matthäus-Kirchhof in Schöneberg . Since 1980 his grave has been dedicated as a grave of honor by the state of Berlin .