Untitled.
Signed impressive hand carved and unique stone post cubist sculpture.
Original frosted aluminium base.
Total height with base 2.3 meter
Sculpture only 1.3 meter
Sculpture is built in 3 parts. Easy to dismantle and to move.
Circa 1960.

Mostly displayed in public collections, Karl Jean Longuet sculptures are almost impossible to find on the market. In the past 30 years, checking art database, no comparable sculpture have been auctioned. The only important piece auctioned was a bronze edition (1/8) of a sculpture auctioned for more than 20 000 euros in 1990.

Karl-Jean Longuet was born into a family of socialist intellectuals closely involved in the social history of their time. He is the great-grandson of Karl Marx. His grandfather, Charles Longuet, journalist, exiled in London after the Commune, indeed married Marx's eldest daughter, Jenny. His father, Jean Longuet, is a lawyer and politician close to Jean Jaurès.

Karl-Jean Longuet began his studies at Lakanal high school; of fragile health, he pursues them alone in the countryside. A press caricaturist moment, he entered the School of Decorative Arts in 1927 in the studio of Paul Niclausse, where he rubbed shoulders with Étienne Hajdu and then from 1929 to 1932 attended Jean Boucher's studio at the Beaux-Arts, receiving in 1932 a travel grant for Spain. He admires Rodin and Maillol. Despiau frequently comes to his studio and follows his work with interest. From 1932, Longuet exhibited at the Salon d'Automne and also presented his works at the Salons des Tuileries and des Indépendants. His first sculptures, busts or large figures, purify the volumes and shapes of the human body in the direction of stripping. In 1935, he stayed in Seville. In 1937 he made a monumental fountain for the International Exhibition of Arts and Techniques in Paris.
Exempted from military service because of his ill health, engaged in the Resistance, threatened with being arrested, Karl-Jean Longuet left Paris in 1940 for Nîmes then, for more than a year, in Marseille. He worked there for the cinema, in particular for the decorator Alexandre Trauner and Louis Jouvet. Returned to Paris, the underground national staff of the FFI met frequently at his home, rue Visconti, or in his workshop, avenue Denfert-Rochereau. After the Liberation he exhibited in the Salons (Salon de la Jeune Sculpture, Salon de Mai, Comparisons, Salon des Réalités Nouvelles, Salon d'Automne). In 1946 he made the acquaintance of Simone Boisecq who, having come from Algiers the previous year, worked in his workshop, and married her in 1949. In 1948 he produced the medallion for Paul Langevin for the School of Physics and Chemistry. of Paris and a Monument to the Resistance fighters at the Prefecture of Police. In 1953, he presented his first personal exhibition.
The meeting of Brancusi in 1948 and his personal research lead him to accentuate the stripping of his sculptures, carved in stone, granite or marble, wood, but also made in bronze, lead and copper, which leads him around 1954 on the threshold of non-figuration. He exhibited in Paris in 1961 and participated in numerous collective events in France and abroad, at the Turin Biennials, Middelheim-Antwerp, Carrare, Sonsbeek-Arnhem, São Paulo (1965).
From 1956, Karl-Jean Longuet collaborated with architects in the creation of numerous monumental sculptures for colleges and high schools, in particular: lycée Honoré-de-Balzac in Paris in 1956, 1959 and 1964, girls' school in Saint-Denis in 1956, school group in Limoges in 1956-1959, school of Châtenay-Malabry in 1959, technical college of Mans in 1960, school group of Montreuil in 1963, school group of Athis-Mons in 1964, university complex of Toulouse in 1966 -1968, high school in Massy-Vilgénis in 1971, Jules-Verne school in Vitry in 1972, University of Lille and Paul-Éluard group in Vigneux in 1973, high school Henri-Wallon in Aubervilliers in 1976.
His works are also present in public places and in large groups (Place du Mont-Mesly in 1960-1962 and shopping center of the Palais de Créteil in 1974, reception center of the Peñarroya of the Montparnasse tower in 1976, place in Montigny-le-Bretonneux and Homage to Salvador Allende in Châtenay-Malabry in 1981).

Retrospective exhibitions of his work were organized in Châtenay-Malabry and Metz in 1983, Meudon, Ris Orangis (preface by Francis Villadier) and Trèves in 1984, Rouen (preface by Jean Guichard-Meili) and Thionville in 1987. 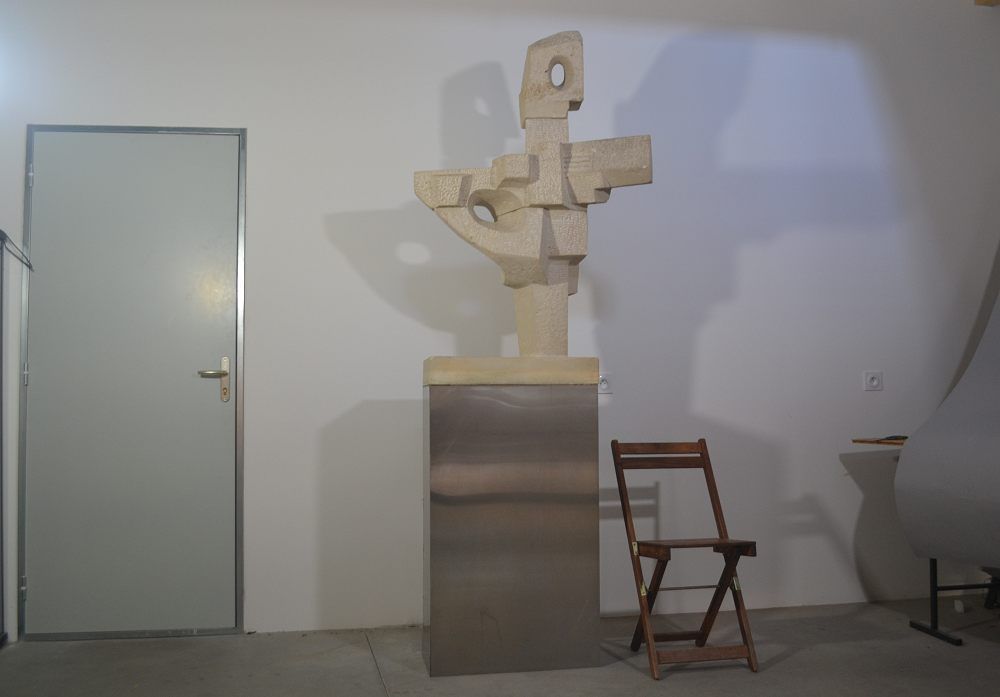