A similar bronze auctioned in 2010 for more than 11000euros . See details in pictures section.

Born in a poor family of Baltic Germans. Не did not receive systematic artistic education, was carried away by drawing since childhood. In his youth moved to St. Petersburg, where in a small workshop began the restoration of porcelain, figurines and bronze sculptures for antiquaries and collectors. Later he created on order the limited copies of the famous works by Russian sculptors.

At the early stage of his work E. Naps repeatedly used the plots of E. A. Lanceray, and generally was under his strong influence, that was reflected in his sculptural compositions, such as "General M.D. Skobelev on Horseback" (bronze), the "Troika in Winter" (bronze), "Cossack on Horseback" (bronze). Famous Naps’ works - the sculptural group "A Cart with Three Horses and Five Passengers Crossing the Bridge" (bronze), the statue of "Unmounted Cossack (Plastun) Saikin on Patrol" (bronze), two paired candlesticks "Lamplighters" (bronze) and inkpot "Woodcutter Having Lunch" (bronze) were widely replicated on Kasli and Kusa plants in the beginning of the twentieth century. All famous works of Naps were evidencing of his professional possession of bronze art.

The data about his family and late years is very scanty. According to historians Eugene Naps died in 1886

There is a version that Eugene Lanceray worked under the pseudonym "Naps". Almost all Naps's works were casted in bronze factory Werfel that was the main competitor of F. Chopin workshop. This workshop signed a long-term shackling agreement with Lanceray (as it later turned out - almost for the entire life of the sculptor). Under the terms of this agreement, Lanceray could not cooperate with other bronze casting workshops under his own name. Therefore, some experts suppose that under Naps’ name the works of Lanceray were manufectured. The basis for this assumption – The similiarity and recognizability of style, methods of modeling, the scarcity of data about the restorer Eugene (Johann) Naps, the constant lack of money, large family of Lanceray and his well-known tendency to mystification of his artistic environment turned out to be the basis of this assumption.

Original name of the foundry: F.F. Woerffel & Gesserich.
Known from 1840s through 1914, after that it became a property of Carl Faberge.
Active with sculpture casting from early 1870s till early 1900s.
It was the main competitor to F. Chopin (Shopen) foundry.
The foundry was renamed from “Fabrica Woerffel” to “Zavod Woerffel” in 1893. As a fact, here is no spelling “Завод” in Latin letters known, though there is a bronze with the marking “FABR” and the modeling date 1903 to it. So, it is possible that for export they could keep using “FABR” all the time, even after 1893.
The names of the sculptors whose works have been cast at the foundry are: N. Lieberich, V. Grachev, E. Naps, A. Ober, R. Bach, L. Posen, P. Samonoff and some others.
Location: St. Petersbourg, Russia.
REFERENCE: br2311
on hold 12 2022 (EU)
Email us about this item 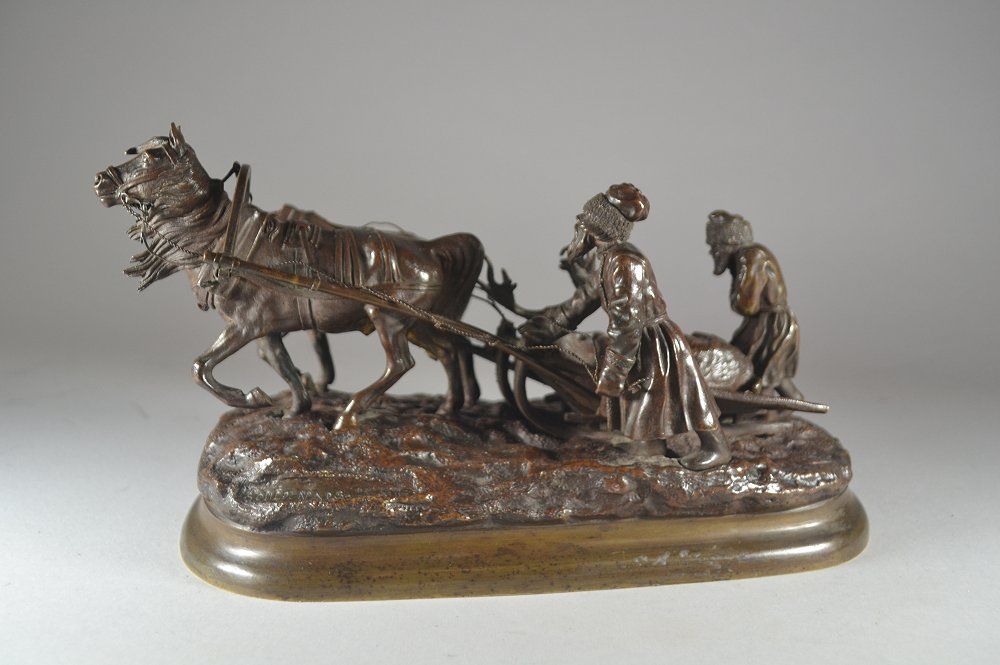