Due to lockdown in France until 11 May 2020 we will not be able to send this item before 15 may. This piece is still not in our showroom. We will pick it up between 11 and 13 May. You can reserve it now sending us only 20% of price and balance the 15 of May. (This provision only concerns few of the last items displayed on our website. Most of pieces are available in our showroom and we can ship them anywhere anytime)

Portrait of a lady.

Frans Regoudt ( Blankenberge , July 6, 1906 - Palma de Mallorca , April 15, 1977 ) was a Flemish painter of landscapes, marines and portraits. He was married to Yvonne Claessens.

Regoudt's parents had a hotel in Blankenberge. He himself was not interested in following in their footsteps. In 1925 he obtained the teacher certificate (the diploma of teacher) at the Rijksnormaalschool in Blankenberge . He now had many contacts with the Blankenberg landscape and navy painter Gadeyne ( 1857 - 1936 ), who taught him the basic concepts of painting. Regoudt studied painting at the Ghent Academy.

In 1929 he became an art teacher at the Royal Atheneum 1 Centrum Oostende , succeeding Auguste Distave . He smoothly integrated into the Ostend artistic environment of the time and occasionally exhibited in the Galerie Studio: individual exhibitions in February 1934 , March 1935 and February 1936 . In Ostend he soon became a much sought-after portraitist who was able to paint fashionable, flattering portraits.

In 1941 he escaped to America where he also became a successful portraitist in New York . He painted, among others, Herbert Hoover (former President of the United States ) and Thomas Curran , Secretary of the State of New York. He taught there for three years at the Academy of Allied Arts and also held exhibitions there.

After the war he returned to Ostend. In 1949 he was appointed as an inspector of art education. Every year he held a modest individual exhibition in a Blankenberg gallery. Around 1954 he lived at 13 Heilig Hartplein in Ostend. Later he had an art gallery “De Kwinte” at Vlaanderenstraat 35. There was also his studio. That was later put into use by the marine painter Roger Cools. After his retirement in 1965 , Regoudt often stayed in sunny Mallorca , where he died twelve years later.

Regoudt went through post- impressionism , expressionism , the new objectivity , the non-figurative and the surrealism that was previously magical realism . In his paintings he was mainly inspired by the sea, the city and the village. There are also many nudes and portraits. The young Gella Allaert , the later well-known actress, were among the portrayed . 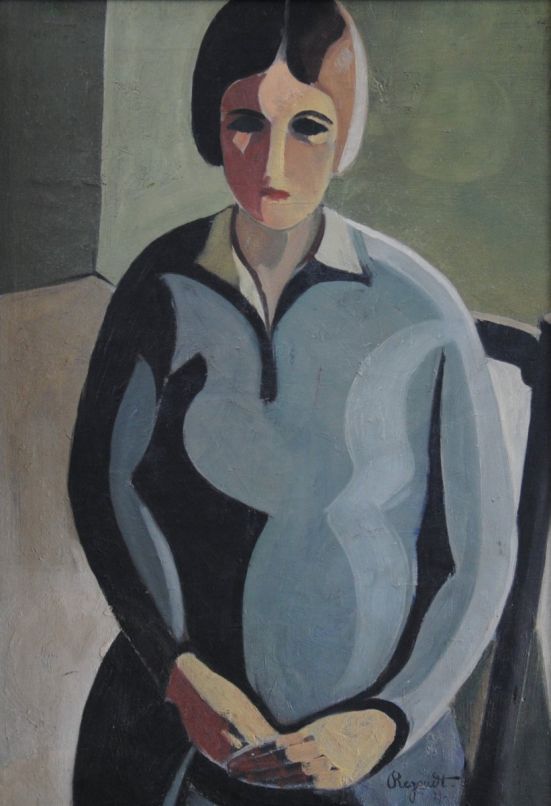