Camille Fauré produced designs for Limoges, long famed for its enamels Born in Perigueux in 1872, he spent a long apprenticeship before setting up his own workshop at Limoges, where he worked for some fifty years. Fauré became Limoges most famous and talented enamel artist. He exhibited in the 1925 International Exhibition in Paris that gave name to Art Deco.

His early work, like his post-World War II designs, involved large floral and figurative patterns, often in rich colors. He exhibited through the Paris shop, Au Vase Etrusque, and produced vases, bowls, ashtrays, boxes and other items. The vases were made in many different shapes, including those of the gourd, kettledrum and egg, with geometric or stylized floral patterns. It was his geometric designs, however, which set him apart as the greatest creative enameller of the Art Deco style. Geometric designs included chevrons, lozenges, diagonal and stripe patterns and floral motifs, ranging from naturalistic to stylized patterns of leaves and flowers. The geometric patterns featured strong hues of blue, red, orange and yellow accented with blacks, whereas the floral patterns had more delicate hues such as turquoise, light blue, pink, lavender and white. Some vases had panels and borders of floral motifs combined with geometric stepped and angled motifs.

Using large vessels, vases, bowls or open-mouthed jardinières, the copper was covered in multiple layers of polychrome enamels in hard, vitreous, three-dimensional geometric designs of subtle complexity and color combinations. His friend Marty occasionally worked with him, in a very similar style. Both produced a small number of pendants in enameled gold, silver and copper.
REFERENCE: cam1701
sold 03 2020 (USA)
Email us about this item 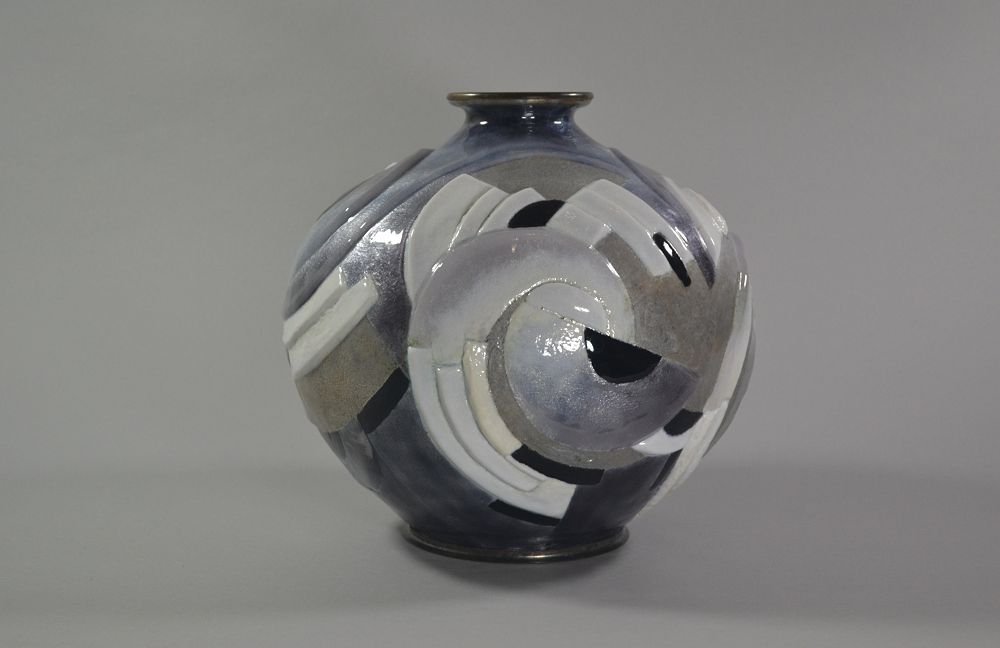