Cabaret dancer portrait. Pencil and gouache on strong paper.
with frame 35cm 45.5cm
Condition is good as you can see on pictures with creases and stains.
Signed and dated 1931.

Biography
The only child of Joseph-Gustave-Gérard and Catherine-Théodorine-Léopoldine Marie Englebert, Marie-Madeleine Gérard is the pampered child of already elderly parents, since at birth his father is 42 years old and his mother 37 years old. Very early the little girl manifests gifts for drawing. Her parents entrusted her to Évariste Carpentier, director of the Royal Academy of Fine Arts in Liège. Marie-Madeleine will keep a great impression of loneliness from parents who are too withdrawn from the world and whose idealistic aspirations cut the child off from the realities of existence and give him the feeling of an uncertain future.

At fifteen, she produced a painting of the Virgin in the manner of Rubens, who impressed those around her. His talents are therefore often called upon for holiday decorations or for religious illustrations. One day, the sisters of a neighboring convent asked him to kindly paint small santons for their nursery. While she tries to paint the eyes of little Jesus, Mady - that's her nickname - exclaims: "Ah! Do I have to be a goddamn beast to do such a job! ". Just then, a ladybug (commonly known as "goddamn beast") falls on the table, right in front of her. Marked by this coincidence (the season was not for ladybugs), she will often tell this anecdote to her loved ones.

A serious stroke in 1925 made his father's life fragile, and the deterioration of his moral and physical health struck mother and daughter with anxiety. Marie-Madeleine then accepted, without really thinking about it, the marriage proposal presented to her by Maurice Bourguignon on September 18, 1929. A son, Roger, was born in Brussels on October 25, 1930.

A few months after her marriage, which gave her French nationality, Marie-Madeleine lost her father, then her mother in 1931. Very affected by this sudden death of a mother she loved deeply, she contracted a serious affection of the gland thyroid, requiring more than a year of care.

Having lost the two pillars of her existence, Marie-Madeleine finds her outlet in painting. The first exhibition of her works took place in Liège in 1920 at "l'Oeuvre des Artistes". She also participates in the Paris Triennial Salons.

In 1937, her work, which she signed Marie-Madeleine Bourguignon, was exhibited in Brussels, in the Demar room. In 1939, she organized a private exhibition in the studio she owned in Brussels, avenue de la Couronne. In 1941 and 1943, new exhibitions at the gallery of the Golden Fleece in Brussels, framing that at the Aghte gallery in Antwerp, in 1942.

It was not until 1941 that his career took off. His portraiture earned him important commissions which ensured the Bourguignon couple a comfortable lifestyle. It’s also a happy artistic period. Marie-Madeleine works intensely, painting celebrities and eminent personalities who flock to her studio (she will thus meet, years later, Queen Elizabeth II, who will commission a Portrait of the Shah of Iran for Buckingham Palace ). The studio is spacious, she likes to play the piano (which she plays perfectly) when evening falls.

The contrast between a brilliant professional life and a nonexistent personal life with a husband who does not share any affinity with her, is increasingly painful to him. Under the influence of a new affection, she decided to leave it in 1944. She had her canvases, frames, paint cans and personal effects carried in a handcart in the direction of her new workshop which she installed on rue des Tongeren, still in Brussels. His paintings are now signed Mady-Bourguignon-Gérard. After a few years, she signed them with her only maiden name, Marie-Madeleine Gérard.
She is actively preparing her next exhibition in Brussels which must take place in November 1945 at the gallery of Belgian Art when on August 15, 1945 she suddenly loses her sight, which had never been excellent (she had suffered from myopia since her birth ). Little girl, it seemed to her that everything was living in a certain mist. After a long period of inactivity and inadequate care, she went to a renowned surgeon in England. Operated with both eyes, only the right will be more or less saved. Her strength of character allowed her to continue working and to organize the exhibition of her works, old and new, in 1955 in the new workshop that she installed on rue Tervueren.

In 1959, she left Brussels definitively and set up her workshop in Paris. She undertakes important historical and artistic research on Frédéric Chopin to whom she has already devoted several artistic compositions since 1954 and which are the subject of a major exhibition at the Polish Historical and Literary Society of Paris from 5 to 18 January 1961. She also became an active member of the Polish Library in Paris.

Become totally blind, she escapes from solitude thanks to some faithful friends. In January 1981, she left her apartment at 123 rue Saint-Honoré, before dying on March 11, 1983, in a retirement home near Mantes-la-Jolie. She is buried in the Froissy cemetery.
REFERENCE: mg3001
sold 01 2020 (EU)
Email us about this item 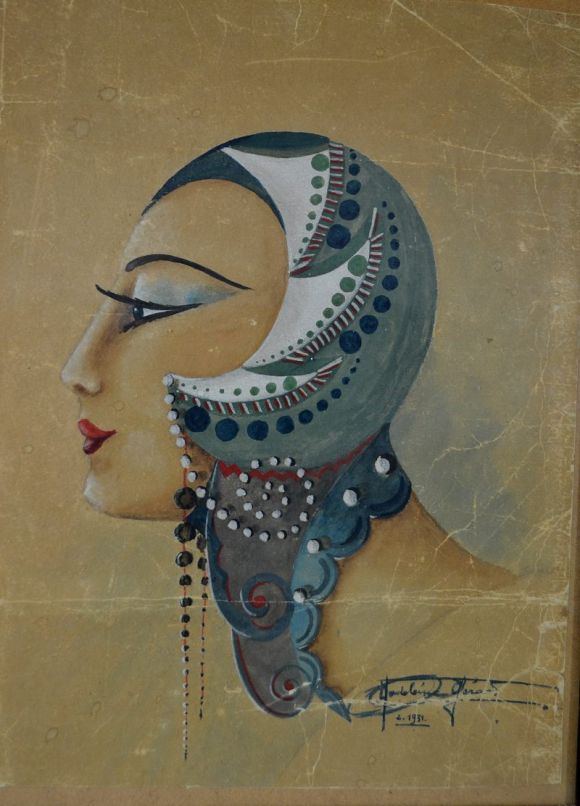