The Borghese Gladiator is a Hellenistic life-size marble sculpture portraying a swordsman, created at Ephesus about 100 BC, now on display at the Louvre.
The sculpture is signed on the pedestal by Agasias, son of Dositheus, who is otherwise unknown. It is not quite clear whether the Agasias who is mentioned as the father of Heraclides is the same person. Agasias, son of Menophilus may have been a cousin.
Rediscovery
It was found before 1611, in the present territory of Anzio south of Rome, among the ruins of a seaside palace of Nero on the site of the ancient Antium (modern Anzio and Nettuno). From the attitude of the figure it is clear that the statue represents not a gladiator, but a warrior contending with a mounted combatant. In the days when antique sculptures gained immediacy by being identified with specific figures from history or literature, Friedrich Thiersch conjectured that it was intended to represent Achilles fighting with the mounted Amazon, Penthesilea.

The sculpture was added to the Borghese collection in Rome. At the Villa Borghese it stood in a ground-floor room named for it, redecorated in the early 1780s by Antonio Asprucci. Camillo Borghese was pressured to sell it to his brother-in-law, Napoleon Bonaparte, in 1807; it was taken to Paris when the Borghese collection was acquired for the Louvre, where it now resides.

Misnamed a gladiator due to an erroneous restoration, it was among the most admired and copied works of antiquity in the eighteenth century, providing sculptors a canon of proportions. A bronze cast was made for Charles I of England (now at Windsor), and another by Hubert Le Sueur was the centrepiece of Isaac de Caus' parterre at Wilton House; that version was given by the 8th Earl of Pembroke to Sir Robert Walpole and remains the focal figure in William Kent's Hall at Houghton Hall, Norfolk. Other copies can be found at Petworth House and in the Green Court at Knole. Originally a copy was also located in Lord Burlington's garden at Chiswick House and later relocated to the gardens at Chatsworth in Derbyshire. In the United States, a copy of "The Gladiator at Montalto" was among the furnishings of an ideal gallery of instructive art imagined by Thomas Jefferson for Monticello.

Ferdinand Barbedienne, (1810-92) is mostly known for his bronze foundry, which he owned with Achille Collas in 1839 who had invented a method for mechanical size reduction of larger sculptures. His first castings were reduced versions of antique statues from European museums, and in the mid 1840s began reproducing the work of living sculptors including the animalier sculptor, Antoine Louis Barye and later in the 19th century Auguste Rodin. On the death of Achille Collas in 1859, Ferdinand Barbedienne became the sole proprietor of the business which at that time employed 300 workers. His work was held in high regard, and he was elected President of the Reunion of Bronze Makers in 1865, a position he held for the next 20 years. Ferdinand Barbedienne died in 1891 and the business taken over by his nephew Gustave Leblanc who continued the foundry with the high standards set by Barbedienne. The business closed in 1954. Works from the foundry are most commonly marked 'Fondeur F. Barbedienne' or similar.
REFERENCE: bo2304
sold 05 2021 (UE)
Email us about this item 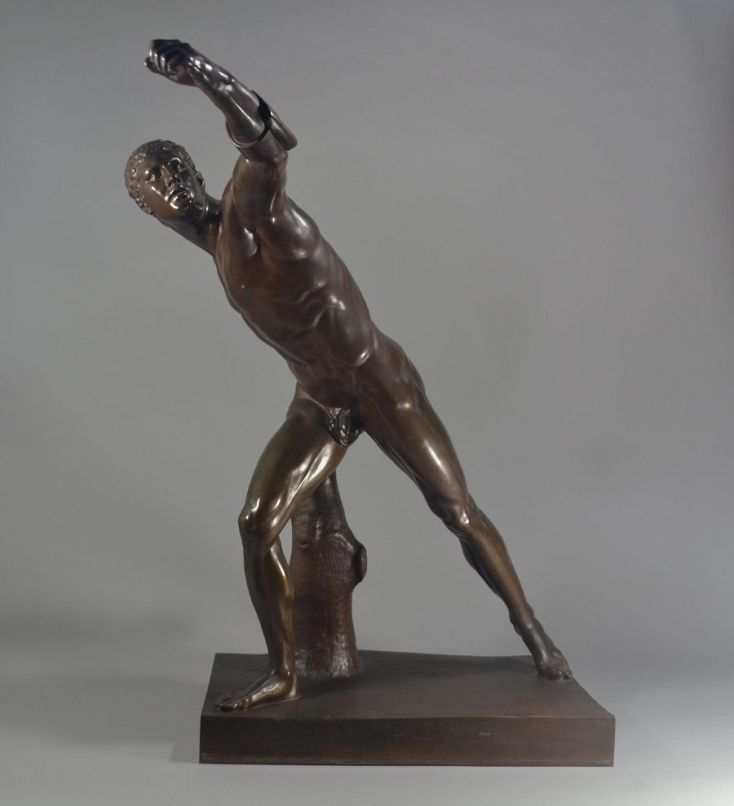